The MediaCityPort shall be realised according to the plans of the architect Mels Crouwel. Therefore one of the few historical buildings of the former freetrade harbour, the KaispeicherA - a huge ancient warehouse - would be demolished completely and reconstructed in it´s basic shape and dimension. Actually it is used for events and business partys. The MediaCityPort promises the unification of work, live and pleasure for the New Economy. The "core piece" of the MediaCity should be a so called MediaCityAcademy, but this idea was already given up. Rumours are afloat that the latest plans to build the MediaCityPort are canceled or at least uncertain due to the so called NewEconomyCrisis. The KaispeicherA was the final location of the tetrapak-platform ReadyToCapture for the artgenda 2002. 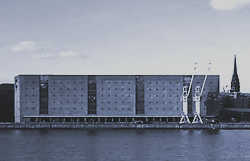 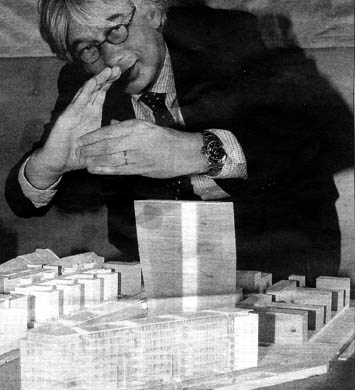 "A lighthouse for the HafenCity", the Media City Port, sketch by architect Mels Crouwel. "A tower made of glass will be shuffled in to the old building-triangle."

Back to HafenCity | MediaCity | EventLabs