Apart from contemporary art and culture, a cruise terminal, a russian submarine, [bungeee jumping], trendy parties and more represent the common means of promotion for the HafenCity as an EventCity, similar to those you can find in most of the HarbourRestructuringCities. The center of urban cultural life shall be the so called ÜberseeQuartier?. Although the old >Musikhalle< is actually under renovation, a new concert hall for classical music combined with a seawater aquarium is discussed vividly.

The situation of BlindePassagiere (stowaways) and refugees obviously does not go with the image of an EventCity. The proposal to tow the boat BibbyAltona, where immigrants are accomodated, to the Baakenhafen in the area of the HafenCity is quite surprising. But in the debate about a new location for the BibbyAltona, the HafenCity is considered nothing more but an interim solution. Otherwise it would damage the development of the HafenCity. 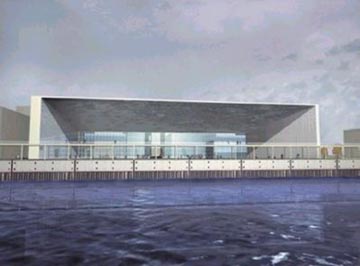 Simulation of the cruise terminal by RKW